“Concupiscence – is an ardent, usually sensual, longing.”“In Catholic theology, concupiscence is seen as a desire of the lower appetite contrary to reason.
For Christians, concupiscence is what they understand as the orientation, inclination or innate tendency of human beings to long for fleshly appetites, often associated with a desire to do things which are proscribed.” (Wikipedia)

Bearing in mind the need my subjects will require for anonymity one of the obvious referents would be EJ Bellocq with his Storyville Portraits (Fig.1), New Orleans. It is unclear who was responsible for scratching the faces of these glass plates; Bellocq himself or the prostitutes they feature. (Fig.2) A clever contemporary take on this would be Nigel Grimmer’s laser-cut wooden masks which parody our attempts to retain our anonymity in this internet age when we are asked to send provocative images to people we are attempting to digitally seduce. I am searching for a suitable aesthetic as well as a means to anonymise my subjects. As each aesthetic choice must be justified – I need to consider and find a ‘style’ that speaks within the narrative and does not confuse or overtake the message I am trying to convey. 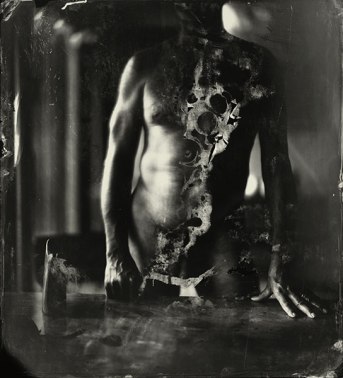 Do I now fall-back upon techniques I am comfortable with or, as with previous modules, try something new in order to broaden my skill-set? Something that drew me to photography many years ago was alternative historical techniques; from Cyanotype to Wet Plate Collodions. (Fig.3) John Dugdale creates beautifully poignant cyanotypes often incorporating self-portraiture. (Fig.4) And Sally Mann’s Proud Flesh project in which she creates ethereally haunting images of her husband’s naked form as they document his ageing body and the effects of muscular dystrophy. We are not used to seeing the nude male portrayed in such a way which makes her tender images all the more powerful. 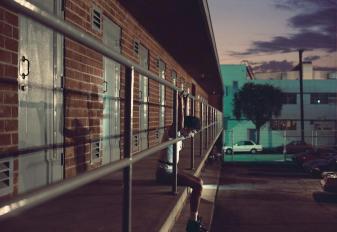 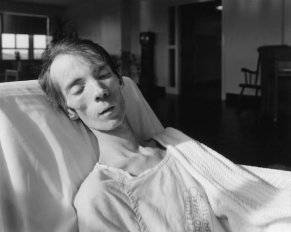 I have to consider how the aesthetic I chose may bring its own meanings and symbolism to the narrative I am exploring. (Fig.5) Philip-Lorca diCorcia’s chose a distinctly cinematic aesthetic for his Hustlers project so rather than judging these rent-boys and the lives they lead by using a seedy sordid image style he deliberately makes them stars within their own single image biographies with a tender reference to their search for the Hollywood dream. (Fig.6) On the other hand if we look at Nicholas Nixon’s images of AIDS Victims ( I use that word most deliberately ) they are cruelly frank in their depiction of the devastating effect of HIV on America’s gay youth. It could be argued that this shocking portrayal was needed in order to wake the consciences of the peoples & the Government. But there was no dignity for those involved as they lay pathetically awaiting death. 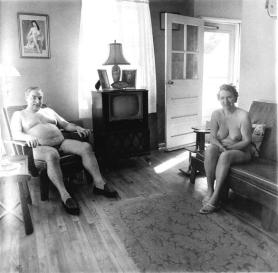 Fig.7 Diane Arbus – Retired man and his wife at home in a nudist camp one morning NJ 1963

When it comes to a neutral approach to documenting slightly taboo subjects I looked at Diane Arbus & Laura Pannack’s photographs of naturists. Arbus’s approach & image is full of unspoken narrative but looks comically quaint to our modern eyes. Pannack’s image is also full of symbolic narrative between the subjects and both are gentle in their vision of a sensitive matter. There is no judgement here…just a questioning of the people featured.

(Fig.9) I must confess to having a deep love of Daido Moriyama’s Provoke work of the late 1960’s with its gritty high contrast images that speak very eloquently of reportage photography. I do not know whether such an image style would be feasible for my project…or whether something similar in colour in the manner of Nan Goldin (Fig.10); (Fig.11) Rainer Werner Fassbinder’s cinematic vision of Querelle is rich in its use of unreal colour casts in a similar manner to Jimmy DeSana (Fig.12). Perhaps I need to actually shoot so I can have a better idea of how this aesthetic would impact upon the reading of my ideas.

With regards to how to pose and set my subjects I have even further problems to encounter as not only do they have to be masked in some form in order to retain their anonymity I also have to ensure the images flatter and hint at the questioning I wish to suggest. Considering they come to me to be photographed in a manner to attract potential extra-marital enjoyment then I am a little tempted to return to the history of photography and create Carte De Visite; staging my studio in the Victorian manner with an obvious ultra-modern twist. I am still toying with the use of mirrors again to reference these alternative characters we wish to become; who’s fantasies can be easily realized. I feel I need to de-construct to find the relevant elements then re-combine to find the narrative; possibly then I may have a better idea of the path to take.